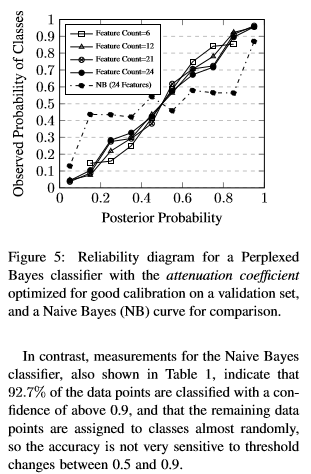 We are proud to announce our latest research paper.

This paper describes an improved version of the grand old Naive Bayesian classification algorithm with rather interesting mathematical implications.

We have shown in this paper that it is possible to create a classifier that can classify data in exactly the same way as a Naive Bayes classifier, but without using the same “naive” independence assumptions from which the old classifier got its name.

Now smoke that for a second.  What we’re saying is that it was completely unnecessary to make those independence assumptions to get that accuracy after all.

So you take them out.

And what results is vastly better posterior probabilities. In other words, the classifier’s confidence in a prediction becomes vastly more believable.

But since it makes the same decisions as a Naive Bayes algorithm, its accuracy is provably the same!

We call the new classifier the Perplexed Bayes classifier because it uses the reciprocal of perplexity (the geometric mean) as the combination operator for individual feature probabilities.

It turns out moreover, that the mathematical implications of using this operator are that the naive independence assumptions disappear.

The Perplexed Bayes classifier and the math thereof are described in this research paper: http://www.aiaioo.com/publications/icon2015.pdf

This new classifier is as easy to build as a Naive Bayes, has the same accuracy, learns fast, and returns confidence scores that are way better.

And the math is amenable to retrofitting into Hidden Markov Models and Probabilistic Graphical Models to dissolve invalid independence assumptions.

Yes, as I said, the mathematical implications are very interesting.

The paper will be presented at ICON in Trivandrum in December 2015: http://ltrc.iiit.ac.in/icon2015/.