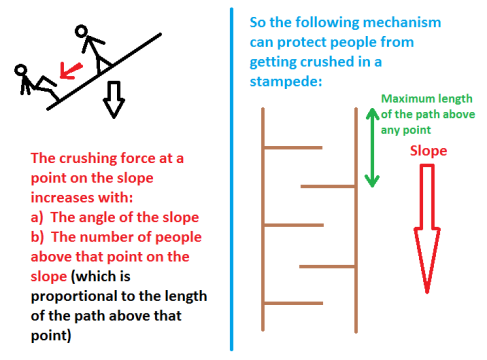 Only a few days ago, many people lost their lives in a stampede on the banks of the Ganga river.  There is a structural solution that can save lives on crowded sloped paths.  The mechanism is described in the image.

It’s actually quite simple.  The force that can result from a crowd of people falling increases with the slope and with the number of people up above that point.

The number of people above a point is proportional to the length of the path above the point.  By cutting up the path with barriers like the ones I have shown in the picture, you can control that length and keep it from becoming excessive.

When I described this solution to my colleague Saravanan (this was back when I was interning in Bangalore four years ago), he suggested a simpler solution (which doesn’t involve barriers).

Anybody want to take a guess how a simpler solution might look and work?