Some governments, such as those of New Zealand and China have opposed FDI (Foreign Direct Investment) in various forms.

We examine in this article what their reasons might be.

It appears that some do.

The Case of the USA

In the USA, there are no serious legal barriers to FDI, but there can be disapproval of and concerted attempts to block FDI.

In this article on factories set up by foreign investors in the USA, there is a discussion of opposition to Japanese manufacturers in the automobile sector decades ago.  I quote:

After Honda Motors opened the first Japanese auto plant in the U.S., in Marysville, Ohio, in the early nineteen-eighties, followed by an engine factory in nearby Anna, Ohio, the company faced an onslaught of vicious anti-Japanese ads on TV and in print, often supported by American manufacturing trade and labor groups.

The comparably subdued response to Chinese manufacturers speaks, on one hand, to changing circumstances, especially the broad acceptance of globalization in the United States and the desire, on the part of some politicians and business leaders, to create manufacturing jobs by whatever means necessary. But it also follows from a conclusion that American companies have reached about their Chinese counterparts: namely, that they are, thus far, relatively inconsequential rivals.

The Case of New Zealand

In October 2015, the government of New Zealand blocked the Chinese firm Pengxin’s attempts to buy (through a local subsidiary) a farm called Lochinver.

The government explained their decision as follows:

Land information minister Louise Upston told the BBC that its decision in September to block Pengxin’s purchase of Lochinver farm does not mean the country is not interested in attracting foreign investment.

“It’s [foreign investment’s] an important part of our economic strategy, but equally when we do have an application for sensitive land and assets – we will put it across the 21 criteria that we need to assess and make a decision based on that,” she says.

“We weren’t convinced that this particular application met that threshold, which is substantial and identifiable benefits for New Zealanders.”

Dr William Rolleston, president of the Federated Farmers of New Zealand, a group that lobbies on behalf of its farmer members, says some farmers are concerned about the scale of the purchases.

“New Zealanders don’t have an issue on ownership at a low level. No one would be concerned if 5% of farmland was owned by overseas buyers,” he says.

“But if 95% of the land in New Zealand was owned by overseas buyers, I think we would have an issue – it would reduce our strategic options in the future.”

During the last elections in 2014, opposition politicians stoked those fears by saying that New Zealanders risked becoming “tenants in their own land”

So, it appears that in New Zealand, the government wishes to keep resources such as land in local hands.

The Case of China

China seems to have laws that make it difficult for foreign firms to compete with local firms, making it a logical choice for them to outsource the manufacture of their goods to Chinese firms.

This is explained on Chinese Law Blog in “Building and Operating a China Factory.  Why Even Bother?”

For example, if you are a Wholly Foreign Owned Enterprise (WFOE), you need to pay the government 20% of the profits of your China operations.

First off, in your first year, you are going to essentially waste around $50,000 in just forming your WFOE, securing various government approvals, paying someone to figure out your taxes, and making up for all the mistakes you will make because you will be in, what is for you, a very strange land.  On top of that will be your taxes, which you are going to need to pay on just about everything.  Figure 20% on profits and even if you do not make profits, figure on them being imputed to you. And figure on having to pay around 40% to various of the Chinese governments as taxes on the salaries you pay your employees.

And all of this is going to mean that your costs are going to be considerably higher than whatever Chinese factory you are currently using to make your product. In Buying A Chinese Company? Why China Deals DON’T Get Done, I wrote of the way this domestic-foreign price differential works in the context of a client looking to buy its Chinese manufacturer:

I said that there is a good chance the Chinese manufacturer is paying half of its employees completely under the table and reporting to the government only half of what it was paying the other half. I then talked of how there is also a good chance the Chinese manufacturer is underpaying its taxes and of how its rent also may be paid under the table. I then said that this sort of thing may be all well and good for Chinese companies, but that if the US manufacturer were to buy this Chinese manufacturer, it would need to do so as a WFOE and it would then immediately be on a “whole ‘nother level” with respect to China’s various tax authorities.

Joint ventures with Chinese firms on the other hand apparently are difficult to retain control of.

This explains why Apple, instead of running its own factories in China, outsources the manufacturing to a Chinese firm – Foxconn.

So it appears that China, through its taxation mechanisms and through selective enforcement of its laws, deliberately blocks FDI into China.

Numbers show that in the past few decades, China received considerable inflows of FDI.

However, much of that FDI is attributable to Hong Kong (Hong Kong’s share of China’s FDI was 55% – ten times that of the USA).

The imbalance in FDI numbers can be seen in the following table taken from an out-of-print volume from the National Bureau of Economic Research in China. 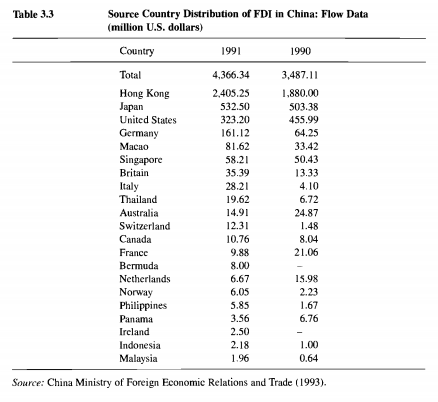 So, it is evident from the above that most of China’s 1990s FDI came from Hong Kong and therefore was not really Foreign DI.

So, what benefits does blocking FDI give to a local area?

In the case of China, the advantage seems obvious.

If foreign investors could open their own factories, they would hire Chinese labour and be able to own the scalable income from the proceeds of manufacturing, passing on only the salaries (which are low in China) to their employees in China.

It is only the inability of foreign investors to purchase and operate Chinese factories as cheaply that forces them to  outsource to Chinese firms.

So, the barriers to FDI in China help drive business to Chinese firms.

These policies can also force the transfer of technology to local firms.

Contrast this with the case of India.

India had a similar boom driven by cheap labour in the form of software services.

There were hundreds of small, medium and large firms in Bangalore offering software services to the financial sector in the USA.

However, a trend I have seen in recent years is for US firms to buy up medium-sized software firms in India and get their software related work executed by these now captive software teams than to outsource work to Indian firms.

So, the inability to get work drives many local IT services firms to sell their operations to US-based firms.

This effectively reduces the total revenue earned locally to just the salaries paid instead of salaries+profits.

I am not certain of how the numbers compare with the boom years but I think the absence of a road up the IT services value chain results in the middle being cut out, leaving only the very large firms and a host of relatively tiny shops in the local IT services market.

So, had FDI barriers existed in the software sector, it would have forced foreign consumers of IT services to access Indian programmers through an Indian corporate entity, increasing the share of the pie that accrued to the local economy, and increasing the quantity of business opportunities for local IT firms.

The argument put forth by the government there is that they need to keep control of land (a scarce resource in New Zealand).

In other words, the restrictions on FDI are meant to allow local firms the retain control of revenue generating resources.

Contrast this with the software industry in India again.

In software the key resources are human resources (the engineers).  And around the world, software engineers are a scarce resource.

There was no barrier to FDI that would allow local firms to compete with foreign firms (which could pay more because of their stronger currencies) for those resources.

The result seems to be a stratification of software engineering resources by capability.

The engineers with the best skills (who could effectively develop products) mostly ended up in American software firms and can be paid salaries in the range of Rs. 60 lakhs per annum.

Engineers with less valuable skill-sets (who can at most configure, install, test or maintain products) seem to gravitate to Indian IT services firms where salaries seem to stagnate at about a quarter that amount.

This flight of resources might have contributed to preventing forays into product development by software services firms in India.

So, in a sense, by providing outside firms direct access to scarce resources, the opportunity to make a lot more money might have been allowed to slip away.

In conclusion, it may be said that sometimes, a clever use of barriers to FDI seems to help extract more revenue (by blocking access to valuable resources) and thus create larger surpluses for local businesses.  Those surpluses in turn help build more infrastructure and capacity and improve the economy.  The case of China, contrasted with that of India, seems to illustrate the case where such barriers might have been beneficial to the economy.